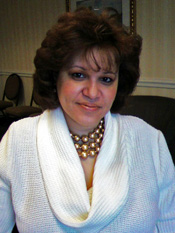 Kathy K. Campbell was born in Newark, New Jersey. She moved to North Carolina at a young age. She returned to New Jersey’s Essex County area where she completed her education in the Essex County public school system. While raising a family, Kathy still found the time and the drive to enroll in a Business Course in the Manpower Program where she took courses in accounting, bookkeeping, and other office procedures. She also took a real estate course and received her license as a New Jersey Real Estate Agent.

Kathy received her first exposure to trade unionism and the Retail Wholesale and Department Store Union (RWDSU) when she received her union card as an employee at Newark’s Bamberger’s/Macy’s in the late 1970’s. As an employee at Macy’s she worked her way up to be a Buyers Expediter whose job it was to assist the store’s Buyers.

Kathy was hired by Local 108 RWDSU President Charlie N. Hall, Sr. in 1991 to assist with their bookkeeping and eventually went on to work in the Benefits Department. In 1997 she was promoted to the position of Business Agent. From there her responsibilities continued to grow as she was appointed to the Local 108 Executive Board by President Charles N. Hall, Jr.. In 2002 she was elected Recorder of Local 108 and was asked to assume the additional title of Political Director in 2003.

Kathy has worked tirelessly in various labor organizations including the Essex - West Hudson Central Labor Council (Vice President), the Women’s Network of the United Food and Commercial Workers (UFCW), Civil Rights Committee for Region 1 of the UFCW (Board member) and Essex County A. Philip Randolph Institute. She has taken courses in organizing at the George Meany Center, and at the Union Leadership Academy at Rutgers. Rounding out her knowledge, she received a certificate from the New York State Department of Labor for Health and Safety in the Retail Industry, and other Certificates for classes taken through the Essex - West Hudson Central Labor Council. For the past five years, Kathy has also worked as a coordinator with the New Jersey State AFL-CIO on their political program. She was one of the lead coordinators during the 2004 Presidential Election and continues this responsibility in New Jersey’s 2005 Gubernatorial Election.

Kathy’s current responsibilities include all phases of member representation, organizing shop steward training sessions, coordinating the Political Program at Local 108, representing President Charles N. Hall, Jr. and the members of Local 108 at rallies and other union activities where a show of union solidarity is important. Kathy has also coordinated various support activities with the local community, through such organizations as the Irvington Neighborhood Improvement Corporation and the AIDS Resource Foundation. With all this she still manages to find time to devote to her fiancé, three daughters and three granddaughters.