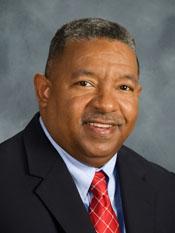 Charles was born and reared in Newark, New Jersey, where he attended the local public schools. His father is a Labor Leader and his mother a Social Worker. Charles is the grandson of an itinerant pastor in the African Methodist Episcopal Zion Church, Rev. Johnnie M. Hall, Sr. and a homemaker and seamstress, Vestella Hall. Because of Charles’ roots, he has a strong belief in God and does not hesitate to give a helping hand when needed in the community. He is always willing to fight the good fight to prevent social injustice.

After graduating from Weequahic High School in Newark, Charles Jr. joined the New Jersey National Guard Signal Corps and served for six (6) years. During his college years, Charles always held a full-time job. He worked as a retail store employee, a factory worker and a clerk in public government. These varying jobs gave his an appreciation for the working class. Charles has always had a strong interest in the legal system and the criminal justice field. He had aspirations of becoming an FBI Agent, Police Administrator or even an attorney. In 1987, Charles graduated from Jersey City College with a Bachelor’s of Science Degree, majoring in criminal justice and minoring in business administration. Thereafter, he began to pursue his career in the criminal justice field as a correction officer at Northern State Prison.

Charlie N. Hall, Sr., his father, worked at Local 108 and served as 2nd Vice President. Charles also took on a part-time job as part of the clerical staff. Charles has always looked up to his father and admired the work he was doing with the Union. He saw this as an opportunity to see the inner workings of the labor movement and thereafter, he realized that this was a unique and special opportunity to help others.

In the latter part of 1988, Charles was offered a job as a full-time business agent. He found himself at a crossroad, his lifelong dream of being a public servant in a law enforcement field where he would be able to protect and serve the community, or to join the struggles of the labor movement helping working people achieve a better quality of life. After giving it deep thought and consideration, Charles felt that being a union representative and servicing working people would bring out the best in him. He went to work for Local 108 RWDSU and realized he had a love for servicing the membership and working through the member’s grievances. He has always represented members to the best of his ability and in many cases prevailed on grievances without having to go through arbitration. He also has the ability to and a knack of effectively interpretating the Local’s contracts to the benefit of the membership. Charles decided that he needed to sharpen his skills in labor relations, so he attended the George Meany Center for Labor Studies starting in 1989. He attended many classes some of which included: Labor Law, Organizing, Negotiation in the Private Sector and Negotiating and Writing Contract Language.

In 1990, Charles began to work with the Local’s International, the RWDSU, on organizing campaigns in Georgia and Mississippi. The organizing of poultry workers was an important project to the RWDSU because of the extreme exploitation and mistreatment of the workers in the industry. Meeting these workers showed him the need and true value of unions. It also enlightened him of the roles the Union played in empowering the workers. For a couple of years, Charles worked with RWDSU and maintained his position of Business Agent at Local 108. In 1993, Ebony Magazine featured Charles as one of the “30 Young Leaders of the Future” from around the country who have excelled in their careers and recognized the importance of giving back to the community. Mr. Hall, Jr. also was a mentor for the NJ “School Centered Youth Program” from January 1993 to January 1995. He had also served as President of the Michael G. Steele Civic Association (Irvington’s Mayor) from 1993 to January 1996. In July of 2004, Charles became the Project Director of the Local 108 Y.T.T.W. Auto Technician Apprenticeship Grant Program. Then in May 2005, Charles became a Member of the Board for the St. Clare’s Aids Resource Foundation for Children and was appointed as a Commissioner of the Essex County Utilities Authority. In December of 2005, he was appointed to serve on the New Jersey Minimum Wage Advisory Commission and in January 2006, he became a Board Member of the New Jersey Citizen Action Organization.

In 1994, Charles was elected 2nd Vice President of Local 108. As a second vice president, he was responsible for overseeing all grievances and organizing campaigns. He also began to negotiate contracts. Under the training of his mentor, Charlie N. Hall, Sr., Charles became an aggressive and skillful negotiator. He developed a philosophy while being out in the field-servicing members, which was that, every member is a VIP and should be represented as such.

At the General Membership Meeting in December of 1998, Charles was elected to a three-year term as President of Local 108. The newly elected slate of officers, under Charles’ leadership, pledged to accomplish four (4) things. They pledged to aggressively negotiate progressive collective bargaining agreements, to increase the diversity of the Local 108 staff, to make organizing a priority, and to improve communication with the membership. Since then, Local 108 has accomplished all of these things by adding more staff that reflect the membership, designating funds to organizing, and creating a newsletter and web site.

Charles has also received during his career the following notable awards and recognition:

Today, under Charles’ leadership, Local 108 is committed to organizing workers in all industries who are being exploited by Corporate America. Local 108 has opened its doors to the Latino Community, who are faced with exploitation, earn low wages and often receive no benefits. The Local has organized over 2,000 workers since 2002 and negotiated fifteen (15) new Collective Bargaining Agreements.